May 18, 2006—Fifteen jewelry stores in the Middle East have begun using an RFID system designed to monitor the movement of each piece of jewelry. The system was designed by The jewellery store (TJS), a startup in Dubai, United Arab Emirates, specifically launched in October 2005 to develop and market the jewelry-tracking system. Other retailers throughout the world have shown an interest in the RFID solution, according to Gabriel Nasser, TJS’ IT director. Currently, stores in the United Arab Emirates (UAE), Qatar and Bahrain are using the system, including showrooms of the multinational chain Damas Jewellery.

Jewelers in the Middle East have a special incentive to implement an RFID inventory-tracking solution. The jewelry industry there is dictated largely by the price of gold, Nasser says. For example, a gold chain’s value depends strictly on its weight. Because of that, insurance costs can rise and fall with the fluctuations of the price of gold. When that price rises, Nasser says, many Middle Eastern stores can be forced out of business, unable to pay the additional cost of keeping that jewelry in their inventory. 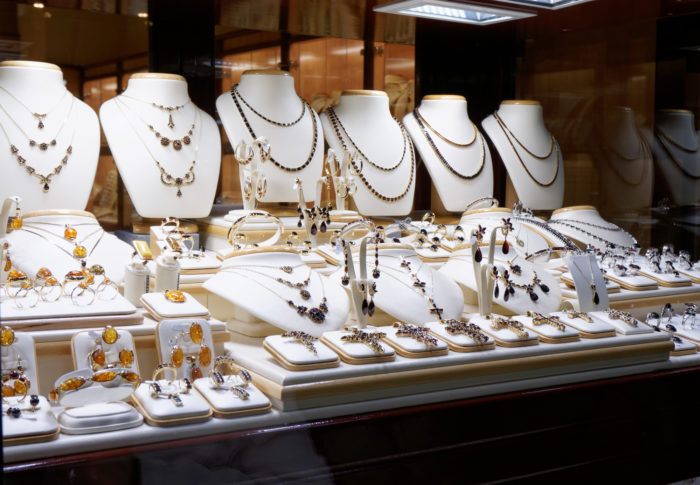 Standard Bank, a London-based company with an office in Dubai, is willing to take ownership of that jewelry, under the condition that the bank receive a daily inventory status report via RFID tracking. The bank benefits by collecting a fee from placing the gold jewelry on consignment with retailers.

When a retailer sells a piece of jewelry, it pays the bank the equivalent in pure gold value for the transaction, based on the following London business-day’s gold price, keeping the remainder of the money it received from the sale. This cuts inventory costs for the retailer and also guards against theft.

Thus far, Standard Bank is the only financial institution to participate, though Nasser says several more banks are interested in the system. TJS provides the technology and facilitates the financial agreement between the retailer and the bank.

The ISO 15693 -compliant passive 13.56 tags, manufactured by Sokymat specifically for jewelry tracking, are enclosed in a 16-millimeter-long hard plastic case. Both ends of the cord attach to the case after being looped through a section of jewelry, thereby completing an electric circuit and rendering the tag operable.

Introduction to Smart Pallet Tracking: RFID Implementation In Warehouses Many companies use loading gates in warehouses and distribution centers every day to pick up and ship products, containers, pallets, and packages. When executing business processes such as shipping or receiving goods, each transaction must be completed... read more

Passed!  ISO 9001:2015 Certificate successfully passed We are proud to announce that Goodwin have passed our ISO audit and have been awarded the ISO 9001 certificates for the quality standards.   What does the ISO certificate actually stand for, and what’s the advantage for us and for you?  The... read more

How to Make your own Amiibo NFC Tags/cards? If you are a Nintendo fan like us, you should be as excited with the title as much as we are. If you are a bit strange about the topic, let us explain: Amiibos are Nintendo’s toys-to-life... read more

How Does RFID Tags Work On Metal?

How does rfid tags work on metal? RFID tags are designed for wide and different industry, some are made to endure extreme temperatures while some are made for animals, and let’s not forget there are special tags for metal products known as Metal RFID tags. RFID... read more